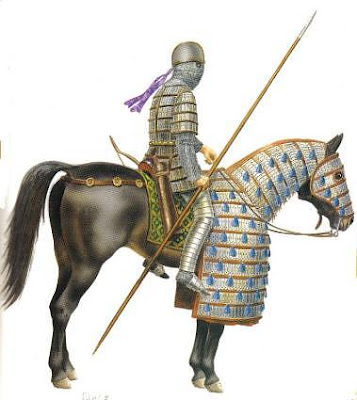 I was doing some research for the unit roster and used a variety of scholars. These are some notes from their research and writings. Hope you enjoy!They shine a light on interesting details of some of the Nikephorian units.SB = Blondal, Beneditz (Varangians in Byzantium)JH = John Haldon (Warfare and Society in Byzantium)"The tagmata consisted of four regiments of cavalry: the Scholae, the Excubitores, the Arithmos (or Vigla), and the Hikanatoi. The first three were of ancient origin, dating back to the time before the time of Theodosius I, but the Hikanatoi were of mid-Byzantine date, being founded by Nikephoros I at the beginning of the ninth century." - SBThe capital had also for its defence a division of infantry which bore the Latin name “Numeri”, but must not be confused with the Arithmos: this division was some 4000 strong.” - SB“The Vigla (or Arithmos) had the duty of night-watch over the imperial palaces, and also in the military quarters. Special guides were assigned to this division in every theme that the passed through when on an expedition away from the capital.” - SB“On such expeditions, the commander of the Vigla went his rounds at night, preceded by a torch-bearer, to make sure that watchmen were at their posts, nor could any person leave the camp without his permission. The Vigla survived as late as the fourteenth, and even into the fifteenth century.” - SB“The Hikanatoi appear to have been less used for life-guard duties than the other regiments, but were much used as garrison forces.” - SB“The guards had special symbols of their identity. The Scholae had ceremonial standards which were carried before them by standard bearers; these appear to have been on the lines of the eagles of the old Roman legions. The Scholae also had a 'Fortune-banner' (Eutychion) carried before them in action, and the other divisions of the army carried other flags and standards (thus the Arithmos division carried Constantine's famous Labarum, the Excubitores had 'draconarii', who may be presumed to have carried a dragon-standard...” - SB“Only men of good family were admitted to these units, or young men of foreign extraction with good connections or promise, and Turks, Slavs, Arabs and other foreigners who had been brought up as Christians were often brought up as soldiers in these divisions. It was therefore natural that these four regiments became in time the special life-guards of the emperors” - SB“A number of sources, both Byzantine and Arab, attest to the impressive effects of this formation on enemy troops – one Arab writer remarks that the horses were armoured so that they appeared to advance without legs. The wedge formation may have been a particular innovation of Nikephoros Phokas, although this is not certain. But the renewed emphasis on both regular infnatru and upon heavily armoured cavalry units certainly predates him by at least hald a generation – the Arab post referred to above was describing a battle fought in 954, for example, while the Sylloge was compiled in the late 940s or early 950s and already attests to some of the changes. The reintroduction of a corps of very heavily armoured cavalry, or at least their greater prominence in the cavalry line of battle, may again date to the campaigns of the general John Kourkouas along the eastern front in the 920s, 930s, and 940s.” - Description of Klibanophoroi - JH “The full time units, or tagmata, both infantry and cavalry, became incresingly preponderant in the overall composition of Byzantine armies from the 950s for the reasons outlined above. The thematic militias correspondingly fell into the background, especially as the frontier advanced and they were needed less and less frequently, although soldiers were still raised in considerable numbers when necessary...” - JH “The soldiers of the middle Byzantine world were drawn from a wide range of sources, and for the period from the early ninth unitl the later tenght centuries may briefly be classified as follows. First, there were the regular thematikoi, soldiers entered on the kodikes, along with their strateia, their obligation to serve.” - JH “Each thema also had a contingent of full-time core troops based in key fortresses and with the strategos or doux in his headquarters. These standing units made up from registered holdiers of a strateia who were able to serve on a permanent basis and from non-registered volunteers, were supported by the state on a full-time basis from the income derived from the fiscalized strateia of others.” - JH
Remember ConstantinopleByzantineKlibanophori is a Strategos, he looks forward to stealing the pay of his men, buying thematic lands and possibly look at raising a few rebellions on his vast latifundia estates
BYZANTINE ARMY